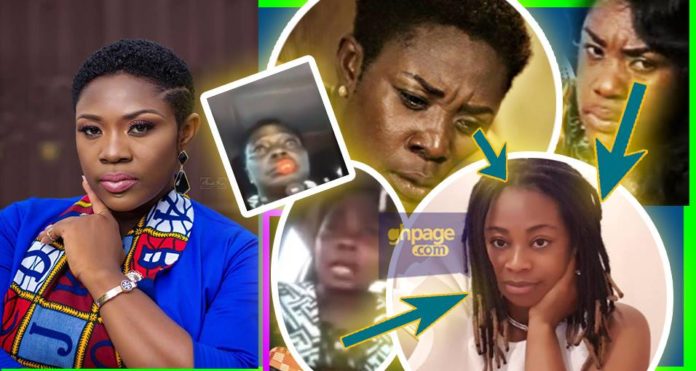 GHPAGE.com has sighted a video of the mother of top actress, Emelia Brobbey, in which she is weeping uncontrollably over what has become the talk of the town—Frema’s attack on her daughter including her family.

In a Facebook live video, the mother captured with Emelia seated beside her and reacting to Frema’s attack on her family said, she is giving Frema only two days to come out and apologize.

She added, Frema should indicate in her apology that all the things she said are untrue, if not she will leave it to God to deal with her.

The mother stated categorically that, all what Frema spoke about are untrue and she is just saying them from her head with no substance whatsoever in it.

She continued that, what Frema has done is a big disgrace to her family and if she doesn’t take care, curses will be upon her and her entire generation.

Emelia also reacted and for her, she could be seen painfully mentioning Frema’s name for over 4 times—indicating a sign of warning and later quizzed, “Frema you want to use my name to become famous”?.

READ ALSO: “Frema has touched my heart and my eyes” – Emelia Brobbey reacts to Frema’s attack on her person, claiming that She is a thief, drunkard, and a prostitute (Video)

The mother further added that she doesn’t understand why people are envious of her daughter and are always on her case.

During the live video, it got to a point she couldn’t control her emotions and started wailing and could be heard uttering these words “Is she the only one in the movie industry, why, why, why are you worrying her like that”?

What broke the camels back was when she said, “Should I drink a poison, should we drink a poison and die-What should we do, what have we done”?. She couldn’t hold it any longer and sadly started weeping —With Emelia, also shedding tears beside her.

Well, watch the video below;