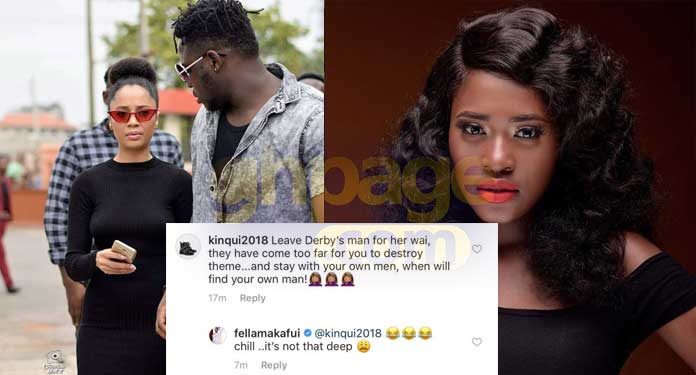 AMG rapper Medikal, yesterday was reported to have allegedly bought actress Fella Makafui a brand new car after sleeping with her in Kumasi on the 22nd of September this year.

According to the report, ever since Sister Deborah returned from her holiday in Dubai, her relationship with the rapper has fallen to the rocks and not sure anything can be done to bring them together.

It was also rumoured some months ago that the two were in a serious relationship, an allegation which was denied by them and the rapper stating that his sugar mummy Sister Debby was aware of his relationship with the actress.

But it seems the rumours are hogwash, according to Fella Makafui’s latest comment on the matter.

On Monday, October 8, the ‘YOLO’ actress shared a video jamming to the remix of Medikal’s ‘How Much’ which features Sarkodie and Omar Sterling of R2Bees fame with the caption: “26,000 for damages #thejobisbig” which got social media users pouring in lots of questions.

One user commented: “Leave Derby’s man for her wai. They have come too far for you to destroy them…and stay with your man. When will you find your man?”

Replying to one user, kingui2018, Fella stated: “Chill…it’s not that deep” – indirectly indicating that there’s no truth to was has been reported.