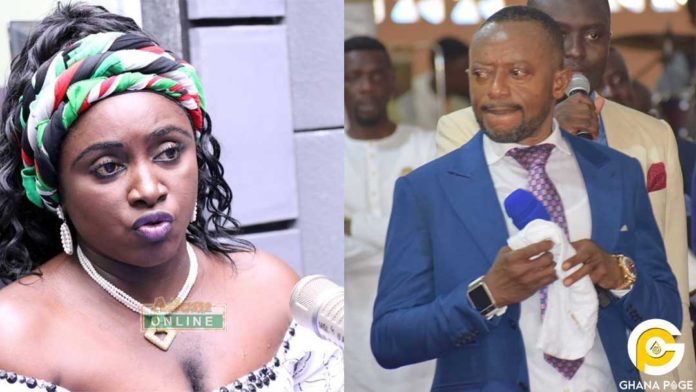 The National Women organizer for the opposition NDC party, Dr. Hannah Bissiw Louisa has threatened to beat Rev. Owusu Bempah hands down if he is left alone for her in a ring. Hannah Bissiw claims she will discipline Owusu Bempah if it is just the two of them without any interruptions.

According to Hannah Bissiw, if Owusu Bempah comes with his thugs and guns, she can’t face him because they will be more than she can handle but if it is just two of them, Owusu Bempah whom she described as a man who has bleached can never stand before her.

SEE ALSO: Owusu Bempah is a disgrace; claims to be a man of God -John Mahama

Her comments come at the back of Owusu Bempah storming Radio XYZ with gunmen to find NDC presenter, Mugabe Maase to ‘finish’ him.

In the video going viral, Owusu Bempah threatened to deal with Mugabe for calling him a “bleached pig”.

However, Mugabe Maase was unavailable when Rev. Owusu Bempah, the founder and leader of Glorious Word Power Ministries stormed his workplace.