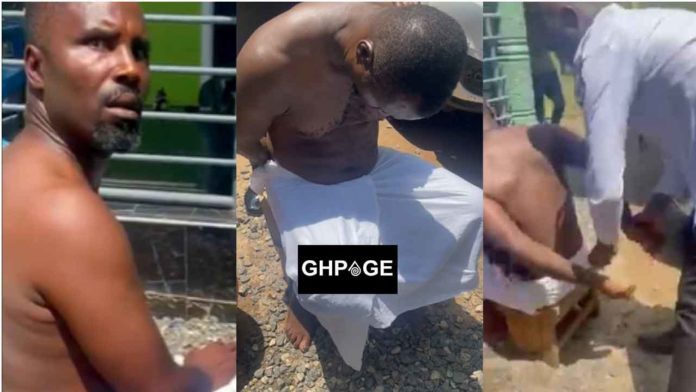 The herbalist who blew the alarm on the man who allegedly tried to kill his daughter for ritual purposes has finally spoken over the incident.

The herbalist known as Nana Adu-Boafo Jnr. explained how the suspect, Evans Oppong brought his daughter to be murdered.

In a police report, Nana Adu-Boafo indicated that the suspect contacted him last year to help him make quick money.

According to the herbalist, they finally met on 29th May 2022, when he ordered Evans Oppong to bring a live python which will be used for the rituals.

Days later, Evans returned and informed the herbalist that he wasn’t fortunate enough to get the python and asked if he could bring one of his 12 children for the rituals.

The herbalist then asked him about the date of birth of his last two children and asked him to bring his 11-year-old daughter for the money rituals.

It was after Evans Oppong and the herbalist had concluded on who will be used for the sacrifice that he reported the case to the police and was later arrested.

ALSO READ: Wife of man who attempted to kill his own daughter for money rituals speaks

The herbalist indicated that he only played along with Evans to enable the authorities to arrest him easily.

He debunked reports that it was a set-up with the police and explained that the suspect was bent on sacrificing his daughter and the only to stop him was to report to the police.

A few days ago, a 47-year-old ‘boga’ was arrested after he attempted to sacrifice his youngest child for money rituals.

This was made possible by the herbalist he contacted. The suspect who was arraigned before the court has been charged with preparation to commit a crime which could lead to murder.