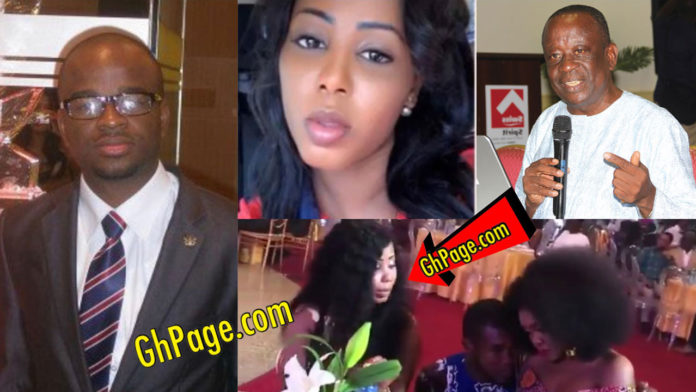 Ghanaians woke up last week to the trending news of the Minister of National Security, Hon. Albert Kan Dapaah modeling for a lady other than his wife in a video.

The video has received massive condemnation from Ghanaians on social media and traditional media as well.

SEE ALSO: We have all your info; we are coming for you-Kan Dapaah’s family warns Chantelle

Many Ghanaians directed their anger and the condemnation towards the lady for betraying the trust of the honorable minister.

Well, the son of Kan Dapaah, Nana Ba K. Efa has finally spoken on the viral video of her father.

On the family tree, Nana Ba K. Efa is the son of Kan Dapaah’s uncle which qualifies him to stand as his father in traditional settings.

SEE ALSO: The man who connived with Chantelle to record and leak Kan Dapaah’s video exposed

According to Nana Ba K. Efa, his father, Hon Kan Dapaah is not a womanizer and is not known to indulge in such behavior anywhere.

He is convinced he got swayed by his friends to try it and it has ended him in such a situation.

Nana Ba K. Efa believes the woman was planted in the life of his father to disgrace him but because the minister is not morally corrupt, he did not fall for it easily.

He went on to recount how the National Security Minister has been a blessing in the family together with his wife whom he referred to as a real mother.

The son of Kan Dapaah added that if Kan Dapaah has wronged anyone, it’s his wife and they know how to settle their problems as a husband and wife.

He went on to thank Ghanaians for understanding the trap his father fell into and has been sympathetic to him.

Chantelle Kujawu, the young lady who recorded the leaked tape of Kan Dapaah is based in Canada. She is believed to be a big-time Slay Queen in Ghana even though she is a mother of 3.

SEE ALSO: Fmr husband of Chantelle reveals how she stole his money & fled the marriage