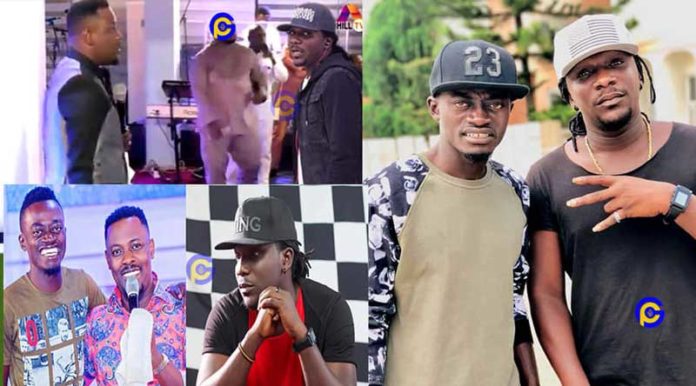 Zack, in his quest to make peace with the founder and leader of True Word Fire Prophetic Ministries, was at the church premises but the man of God sacked him from his church.

In the video, Zack entered the church whiles Prophet Nigel was preaching and personally directed the actor and musician to leave his church when he spotted him.

This was after one of the Junior Pastors identified as Godsway nearly pushed Zack out of the church premises but was stopped by Prophet Nigel.

According to Lilwin’s former manager, he was at the church premises to question the man of God about the ‘padlock prophecy’ and also to make peace.

“I came here alone to make peace. If he asks his boys to get me out of his church I will gladly leave. I came for peace, not for war that’s why I came alone”, Zack said.

Prophet Nigel Gaisie, last week disclosed to Kumawood comic actor Kwadwo Nkansah Lilwin at his church premises during a prophetic session that his former manager known as Zack with the help of a spiritualist has locked his voice with a padlock.

According to the man of God, Zack did that with the intention of obstructing his music career.

Zack, in reacting to the prophecy was really outraged and gave Prophet Nigel Gaisie a one-week ultimatum to retract his statement and also provide evidence to back his allegations.

He also disclosed that he will take legal actions against the man of God if he fails to adhere to his request.