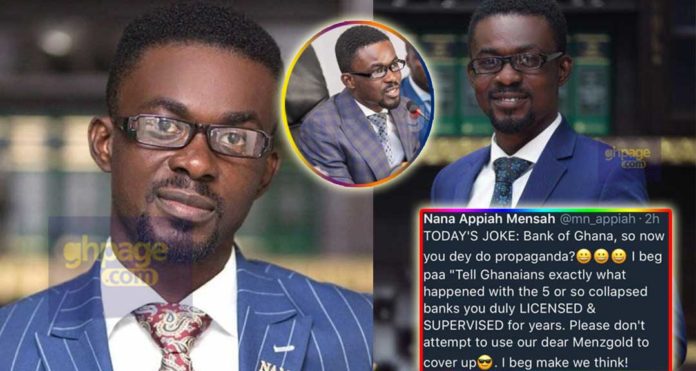 Nana Appiah Mensah, the CEO of Menzgold has hit hard at Bank of Ghana describing them as propagandists. He further cautions the Central Bank of Ghana who are also the regulators of financial related institutions to tell Ghanaians what happened to the collapsed 5 banks and not use his Menzgold for the cover-up.

Bank of Ghana for some months now has been sending warnings to Ghanaians to be cautious of how they deal with Menzgold, a gold deposit institution because they are not licensed.

SEE ALSO: Watch video of Nana Appiah Mensah addressing his workers at Kasoa like a president

Nana Appiah Mensah and the Menzgold management has come out to reveal that Bank of Ghana is not their regulators so they don’t see why they keep meddling in their affairs.

It seems that may have irritated NAM1 as Nana Appiah Mensah is affectionately called to wake today 6th August 2018 to see another publication in the newspaper sending out another warning to Ghanaians about Menzgold.

In a rather harsh and completely unexpected of a corporate high profiled personality, NAM1 took to Twitter to throw shades at the Central Bank of Ghana.

He called Bank of Ghana out as a propagandist and begged them to explain to Ghanaians how the 5 banks which were licensed and were under their supervision failed.

He further warned them not to attempt to use Menzgold as a cover-up. The tweet was accompanied by a video of some Fire service band drummer dancing hilariously.

TODAY’S JOKE: Bank of Ghana, so now you dey do propaganda???? I beg paa “Tell Ghanaians exactly what happened with the 5 or so collapsed banks you duly LICENSED & SUPERVISED for years. Please don’t attempt to use our dear Menzgold to cover up?. I beg make we think!

TODAY’S JOKE: Bank of Ghana, so now you dey do propaganda???? I beg paa “Tell Ghanaians exactly what happened with the 5 or so collapsed banks you duly LICENSED & SUPERVISED for years. Please don’t attempt to use our dear Menzgold to cover up?. I beg make we think! pic.twitter.com/o4zADtIsP9

Already, many people have called him out for his rude response to a such a dire situation and have advised him to do the needful by sitting with BOG officials and not respond on Twitter.

Bank of Ghana has not reacted to his rude tweet yet. Ghpage.coom will update when there is any new development.

SEE ALSO: Read The Profile Of All The UniBank Executives Who Are Likely To Lose Their Jobs From The BoG Takeover