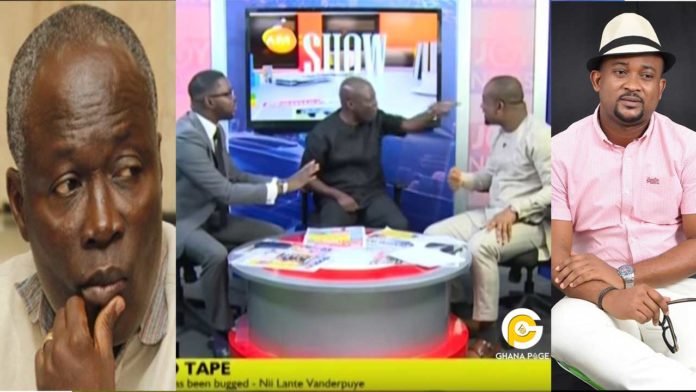 The Deputy Information Minister, Pius Enam Hadzie and the NDC Member of Parliament for Odododiodio Constituency, Nii Lante Vanderpuye have been spotted in a video trading insults at each other on live tv.

The two politicians were having a live discussion about the NDC chairman Samuel Ofosu Ampofo’s leaked tape.

The discussion was about Samuel Ofosu Ampofo comment about the formation of a ballot box protection unit.

The Member of Parliament for Odododiodio constituency asked if the ballot box protection unit is a militia group and Pius Enam Hadzie sarcastically said it was a church.

This answer infuriated Nii Lante Vanderpuye and started raining on Pius Enam Hadzie which he retaliated and almost ended in a fight.

The host had to intervene to prevent further altercation and also rebuked their actions as such words cannot be allowed on television.

This audio was leaked by the Member of Parliament for Assin Central, Kennedy Ohene Agyapong but according to sources it was given to him by a high-ranking official in government.