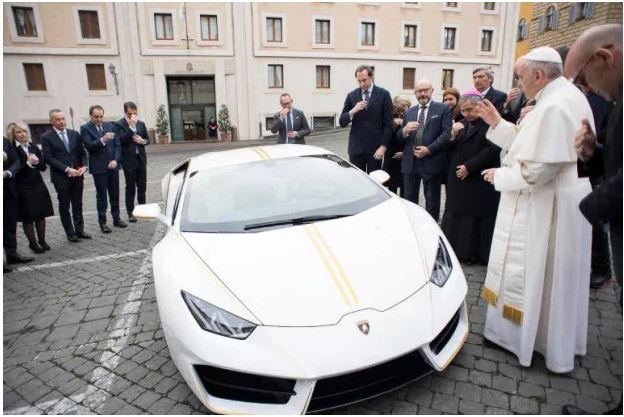 Catholic head priest, Pope Francis has just received keys to a fancy and luxurious new Lamborghini sports car but planning not to use it for his own benefits.

The head priest was gifted a white-painted, special edition Lamborghini Huracan, which sells for around 200,000 euros, by the luxury automakers.

Considering the Appearance, it perfectly matched the pope’s trademark white cassock as he laid his hands to bless it outside the Casa Santa Marta, the guesthouse within the Vatican where he lives – Telegraph writes.

However, Pope Francis who is famous for his frugalness and simplicity plans to auction his expensive Lamborghini supercar which he received on Wednesday to raise funds for the charity home.

Pope will never be spotted cruising behind the sleek wheels as he immediately announced the auction of the car as the keys were handed to him.

He blessed the Lamborghini, signed its hood, and promptly handed it over to Sotheby’s, which will be auction off on his behalf, with the proceeds to go to three of the pontiff’s favored charities.

The special-edition sports car, which boasts of a 610 metric horsepower, is expected to be auctioned for more than its Italian retail price of around €200,000 because of it’s significant purpose.

The money will be budgeted on the accounts of helping displaced Christians in Iraq, victims of trafficking and prostitution, and Italian charities working with women and children in African countries.

Well, speaking on such accounts, last year Pope Francis ordered cars he used during a visit to Poland to be auctioned off to help Syrian refugees, and in 2014, he sold a Harley Davidson motorbike that he had been given – and a matching leather jacket – for the benefit of a homeless shelter in Rome.

The Pope’s modesty and generosity are in complete contrast to the majority of Christian leaders around the world, particularly in Ghana where pastors are bent on the rock star lifestyle.

Check The Images Of The Pope Receiving The Lamborghini Car Below…….. 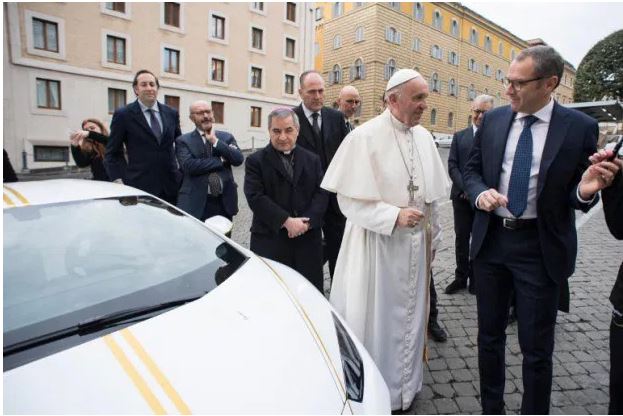 Share
Facebook
Twitter
WhatsApp
Previous article“I Am Tired Of Being Single; I Need A Boyfriend” – Berla Mundi Cries Out
Next articleSarkodie tells Shatta Wale to be ‘serious’ in life