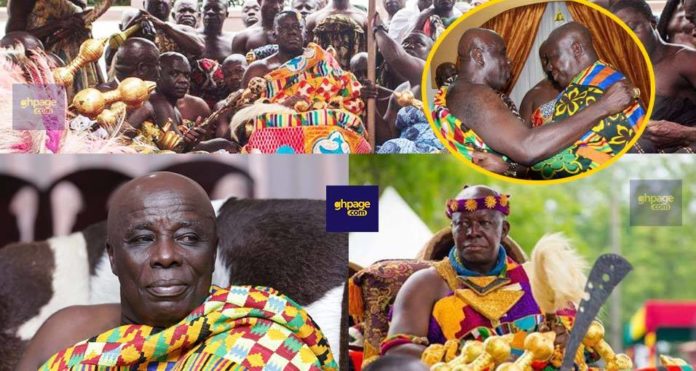 Today, August 23, 2018, will be marked as a day of history when the Asantehene, Otumfuo Osei Tutu II, made a historic visit to Kyebi, the traditional capital of Akyem Abuakwa, at the invitation of the Okyenhene, Osagyefuo Amoatia Ofori Panin as the Special Guest of Honour at the 75th anniversary of the death of a former Okyenhene, Nana Sir Ofori Atta, who is credited with the transformation of Akyem Abuakwa.

This comes after Okyehene paid a visit to Manhyia Palace and made a profound statement at a dinner hosted by the Asantehene at the Manhyia Palace, Kumasi, to climax the second Head of State Gold Invitational Tournament.

In his statement, he cited that although the two of them are different traditional leaders, they share many things in common.

“Asantehene and I have a lot in common despite the fact that the Asantehene was enthroned six months before me. We both came in the same year, the same age and had both lived outside the country. I am bringing all these to show that we are all one,” he said.

“We believe in the tradition that binds us together. We are different people on different stools, but we need to remain as Ghanaians,” he told the gathering.

read also: “We know Castro is not dead” – Andy Dosty dares Asamoah to tell the truth

They have used the 75th anniversary passing of the Okyehene Nana Sir Ofori Atta I credited to have transformed the kingdom into an influence felt far away in Abossey Okai spare parts dealers in Accra to strengthen their cordial relationship.

Today at Kyebi, the cultural display alone was the centre of attraction as men of valour danced to the tunes of the cultural drums as the two great warriors meet to strengthen their ties.