Audio: Vivian Jill finally narrates how Mobile Money fraudster Scammed her, Maame Serwaa and other Stars of thousands of cedis 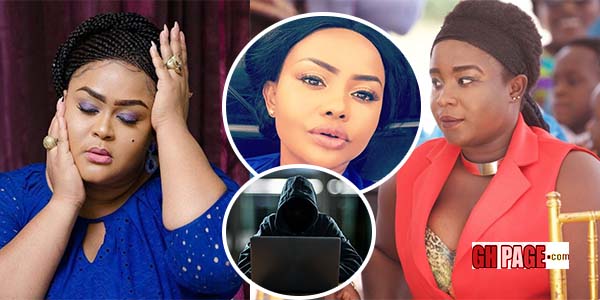 Popular kumawood actress Vivian Jill Lawrence has narrated how she and other kumawood stars like Maame Serwaa fell victims to a recent mobile money scams.

In an audio recording, she recounted her ordeals and how others got swindled.

She stated that, the fraudster, a male, contacted her for a contract to shoot an advert, and she agreed to meet the man to discuss and sign the terms of the contract in Kumasi.

The fraudster who was not in Kumasi decided to make the trip to Kumasi to meet the actress. According to Vivian Jill Lawrence, she received a call from the man saying he had encountered some problems with the police and had to ‘bribed’ them out.

The fraudster added that he had his checkbook with him but the police has refused a check. In effect, he asked Vivian Jill Lawrence to send him GHc 800 which she did. He later called and asked for GHc 1,000 but Vivian Jill became suspicious.

According to Vivian, the fraudster claimed to have gotten her number from Nana Ama McBrown, She later called a McBrown only to be told that she had been defrauded by the man.

READ ALSO:Anas set to expose 60 high profile people who have done great evil to the country

She learnt from Dianah ( One of Maame Serwaa’s relative and management member)that the same’contract man’ had done same with Maame Serwaa and other actors and got them to send him huge sums of money.

Some of the actors including Salinko revealed that he was nearly scammed but sensed fraud, therefore, did not send the money to the person who was requesting for it.

Also,The Mother and Daughter Owusu Bempah Is Alleged To Have Slept With Them Fight On Live Radio (Audio)

Share
Facebook
Twitter
WhatsApp
Previous articleDangote Remains Africa’s Richest For The 7th Time In A Row, This Is How Much He Wealth Now
Next articleTrump Yet Referred To African Nations As “Shithole Countries” And We’re In Awe

All is not well in the camp of Bullet's Rufftown records. There has been a lot of talk about a supposed...
Read more
Entertainment

Strongman signed unto Sarkcess Music in March 2017 parted ways with the label on 14th April 2019 after the expiry of...
Read more
Entertainment

Highlife musician and Zylofon media signee Kumi Guitar born Nana Yaw Kumi according to information we are picking up is getting his...
Read more
Entertainment

Strongman and Medikal didn’t impress me on ‘Bossu’ – Mr Logic