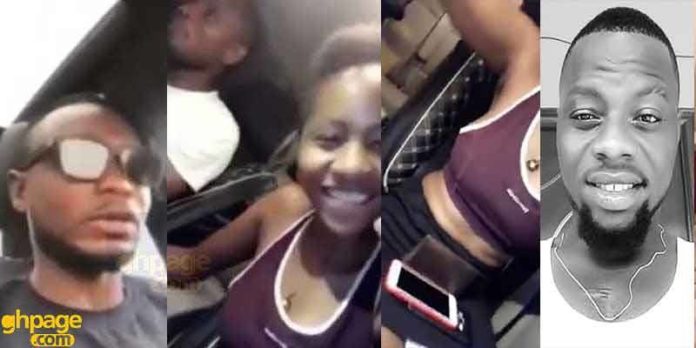 A social media user who claims he was very close to the late Slay Queen, Charlotte Abena Woodey has explained how she fell for the trap of the Sakawa boy who has been accused of killing her to buy a new Benz.

According to the young man who made these revelations through a Facebook Live video, Woodey was trapped with an iPhone 7+ and he did all he could to pull her from the Sakawa guy but she was soo into the material things he was providing for her.

SEE ALSO: Abena Woodey rejected my proposal because I was a bread baker – Man cries out

In a video which went viral after the death of Woodey, Wodey was dancing in a car with her supposed boyfriend who has been identified as Governor Taju, a Sakawa Kingpin from Swedru and she had the iPhone on her laps as she dances.

And that iPhone is the one this young man who appears to know more about Woodey and Governor Taju has accused him of using to trap her to her death.

He even revealed he bought a customized neckless for Woodey in attempt to dissuade her from following the Sakawa boy but she didn’t listen to anything he said to her and his warnings.

Listen to the shocking revelation below

SEE ALSO: Photos of the ‘Sakawa’ boyfriend alleged to have used Abena Woodey for rituals

Ever since the report of Charlotte Abena Woody’s death hit social media, there have been rumors and allegations that she has been sacrificed by one Governor Taju, her boyfriend for a new Benz.

However, the Young Kingpin has reacted to the allegations. He denied ever using her for juju and even insulted people who are accusing him