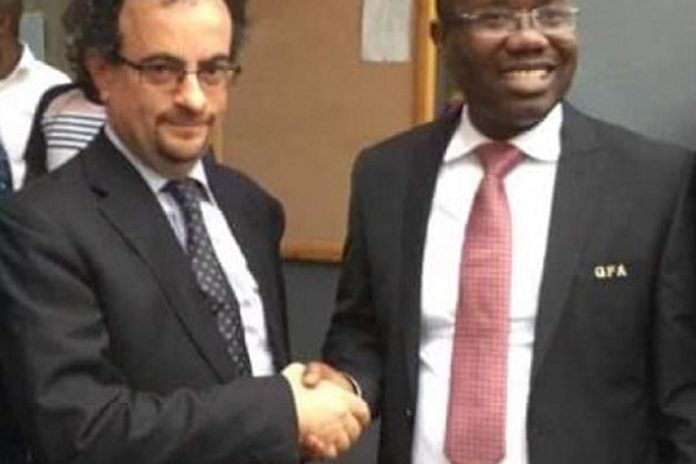 Former UK High Commissioner to Ghana, Jon Benjamin even though not in Ghana is abreast with the happenings in the country.

Mr Jon Benjamin has waded into the fresh allegations levelled against the president of the Ghana Football Association, Mr Kwesi Nyantakyi in an exposé and has taken a swipe at him.

Also Read: Kwesi Nyantakyi Could Be Sentenced To 25 Years In Prison If Found Guilty

Jon Benjamin who is noted for taking swipes at some Ghanaian celebrities especially Jon Dumelo, this time channelled his guns towards the officials of the Ghana Football Association.

In a number of tweets posted, the former high commissioner mocked the officials of the GFA after President Nana Addo Dankwa Akufo-Addo ordered the arrest of Kwesi Nyantakyi for defrauding some investors under false pretence.

Also Read: How Kwesi Nyantakyi Went About His Fraudulent Deals

Jon Benjamin posted, “We need a consignment of Obinim stickers sent over to Morocco urgently please, by whichever route is most coefficient. Thank you.”

We need a consignment of Obinim stickers sent over to Morocco urgently please, by whichever route is most coefficient. Thank you.

In yet another post he made on Twitter, he inquired the whereabouts of the Spokesperson for GFA Sannie Daara, “Anyone seen Mr Sannie Daara? Asking for a friend.”

Asking for a friend.

Kwesi Nyantakyi is alleged to have used the names of the President and Vice President to solicit for bribes worth $8 million in total.

The GFA president who was on official duty in Morocco when the news broke is expected to fly back into the country to explain his comments.

Anas Aremeyaw Anas’ exposé dubbed ‘Number 12’ is expected to air on June 6 and many stakeholders have hinted it to be very explosive due to the massive rot it would uncover at the GFA.