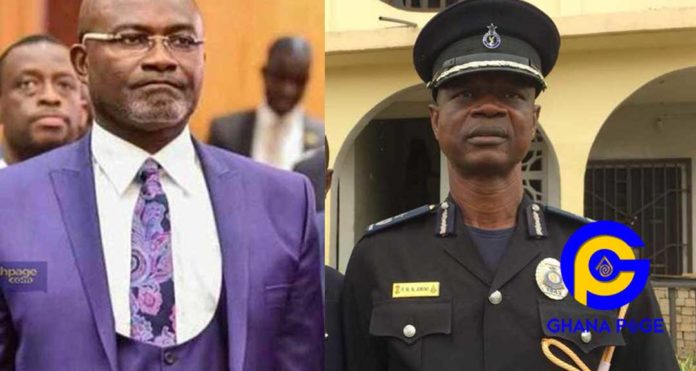 Member of Parliament for Assin Central, Kennedy Agyapong has revealed that there is a deliberate attempt by some persons who are averse to his style of communication and way of doing things to always paint him black.

He indicates that some persons who do not have a full grasp of what transpired at the North Campus of the University of Education, Winneba (UEW) between him and the Central Regional Police Commander, DCOP Paul Manly Awini are championing this crusade promising they will fail.

According to him, the statement issued by the police administration following the altercation he had with one of their superiors last week, was rushed and a deliberate attempt ‘disgrace’ and mar his hard earned reputation.

“Why do I always have to be painted black”, he asked on Accra-based Asempa Fm.

Mr. Kennedy Agyapong who led a delegation on the instruction of the Minister of Education, Dr Mathew Opoku Prempeh to the school to calm down tempers following days of protestations revealed he was cautioning the students against lawlessness.

An eyewitness had explained that Mr Kennedy Agyapong also cautioned the police against maltreating the students so as not to escalate the already tensed situation following the dismissal of some senior lecturers and staff by the current Vice-Chancellor Reverend Father Prof Anthony Afful-Broni.

In the account of the lawmaker, he said “While going through, the students were pelting stones and protesting, I told them to stop and I went to the police to speak to the commander and tell him the issue had been solved so they should let things be. Shortly after, I heard sounds from outside so I went back to the police and explained again that the issue had been solved, they told me the students had blocked the roads with logs and stones and that they should be spoken to.

I cautioned them and told one of his team members who was reiterating the point that he should be careful else I’ll ensure he is sacked because I didn’t understand that a policeman will be inciting violence.

Also Read: Kennedy Agyapong blames Pentecost Church as the cause of all Ghana problems

I didn’t wait for the commander because even he had instructed that his team shoot if they came close, should I have allowed them to kill people? Do you know what would have happened if I hadn’t intervened?.

Mr. Agyapong was bitter about what he says was misconstrued information. He said the details of the events had been misinterpreted and some others omitted.

“Apparently, stones had been pelted and the eye of one policeman had been hurt, it was so bad the Winneba hospital said they’ll have to refer him to Accra. I went to see the situation and I offered some 5,000 cedis to cater for his medical bills….why didn’t they add that when they were writing the statement?