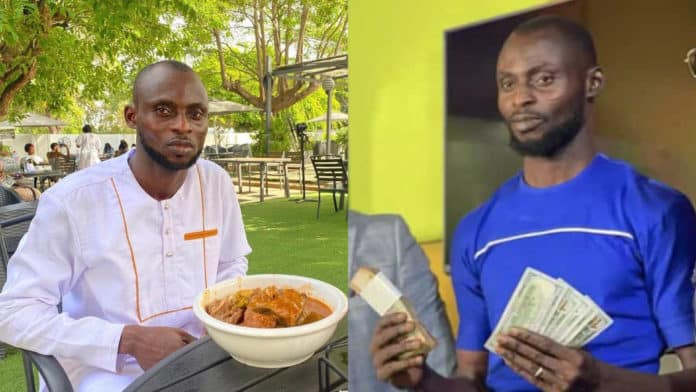 Taxi driver Kwesi Ackon has started spending parts of his good fortune at the plush Villandro Residence (hotel) at East Legon in Accra.

The kind taxi driver was in the news in recent days for his act of benevolence by returning the money he had found in his car.

Through his kindness, he received national plaudits from all Ghanaians who praised him for deciding to return the GH$8,000, money he could have taken away.

It did not end there, many celebrities, politicians and public figures were moved by Kwesi Ackoon’s big heart and entered tokens of appreciation to him.

Vice President Bawumia, footballer Asamoah Gyan, and singer KiDi were amongst many Ghanaians who appreciated his kindness in cash.

Kwesi Ackon’s fortunes have changed positively in days. From a taxi driver on the streets of Accra, he has now moved to the next level of his life. A testament to that was when he was seen at the plush Villandro Residence (hotel) at East Legon.

Kwesi Ackon’s change in fortunes has reflected in the bowl of food he had ordered, the attire he wore and even his overall physical look.