Here's all you need to know about Becca's husband, Tobi Sanni Daniel 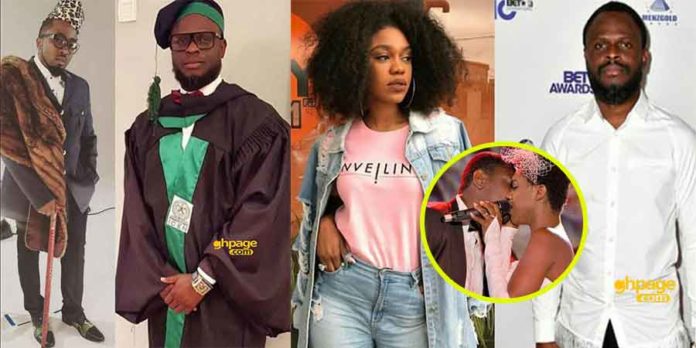 This comes as a surprise as their relationship, to some extent, was kept at a very low key.

Becca is a celebrity. And just as Juliet Ibrahim and the likes do, they normally flaunt their love life on their social media pages but the ‘you lied to me’ hitmaker refused to toe that line.

She only gave a hint on her insta page — even in that — she covered the man’s face when she shared their cozy picture a few months ago.

Nonetheless, the 34-year-old singer has been rumored to have dated a few number of men since she came into the limelight with “You Lied to Me” in 2007.

If the rumors were true, she didn’t settle down with any of them but has chosen/decided to settle with Tobi Sanni Daniel.

But who at all is he, the man who has come to ‘mine’ this precious jewel in our entertainment industry.

GHPAGE.com did some few research on Tobi and here’s what we gathered;

1. He holds a degree in Business Administration and management and a Chartered Economist.

Tobi Sanni-Daniel is a Yoruba from Nigeria. He studied Business Administration and Management at the University of Ilorin. He went on to study and became a Graduate Chartered Economist (GCE).

He furthered his education and then became an Associate Chartered Economist.

According to what GHPAGE.com gathered, Tobi has worked with Triumph Bank. He later moved to Liberty Bank where he acted as the head of treasury operations.

He later served as the Operation Head at the Corporate Head Office in the same bank.

Subsequently, he joined Equitorial Trust Bank and then to Bank PHB, where he acted as Brand Head in both banks – all in Nigeria.

He eventually left the banking sector for entertainment in 2010.

3. He is the founder of State of Mind Entertainment (SOME)

After quitting banking, he moved and channeled his knowledge into the entertainment business. He set up his own entertainment company called State of Mind Entertainment (SOME).

After he set up his company, it has earned him the position of a first-class event manager who is very instrumental in the promotion of premium showbiz stars like Ice Prince, DJ Caise, DJ Spinal, a Nigerian footballer Elderson Echiejile among several others.

READ ALSO: Kofi Annan’s family and foundation give details of his death

4. He is an award winner who won the Nigerian Entertainment Executive of the year in 2015.

And oh, Becca and Oga Tobi were all around each other at the 2018 BETs but we missed it — thought she was with just any random guy. Congrats to them on their day today.

READ ALSO:6 men Becca is alleged to have dated

See links below for their traditional engagement videos and pictures.