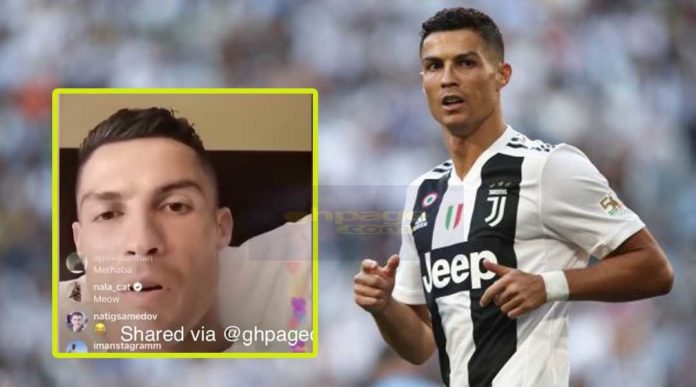 Portugal and Juventus star Cristiano Ronaldo has reacted to the rape allegation leveled against him by a lady Kathryn Mayorga in a German magazine called Der Spiegel.

According to the lawyers of the footballer, they are taking a legal action against Der Spiegel over ‘blatantly illegal’ allegations by an American woman she was raped nine years ago by the star.

On Friday, Kathryn Mayorga was revealed as the woman who has accused Ronaldo of sexually assaulting her in a Las Vegas hotel room in 2009.

Also Read: UEFA lists nine records yet to be broken by Ronaldo and Messi

In an Instagram live earlier last week, Ronaldo responded to fans’ questions on a variety of topics. It is unclear what was the exact question asked before Ronaldo seemingly dismissed the allegations.

Looking into the camera, he said: “No, no, no, no, no. What they said today? Fake, fake news. They want to promote themselves by using my name. It’s normal. They want to be famous to say my name, but it is part of the job. I am a happy man and all good.”

According to reports, the Juventus star was on holiday in Sin City in 2009 with his cousin and brother-in-law when he met the part-time model. During the alleged incident, she claimed Ronaldo fell to his knees and said he was ’99 percent a good guy’ who was let down by the one percent.

According to documents filed at Clark County District Court on Friday, the footballer invited Ms Mayorga and a friend to his penthouse suite ‘to enjoy the view of the Las Vegas Strip’.

Ms Mayorga claims she refused to get into his hot tub because she did not want to ruin her dress, then Ronaldo offered her some shorts and a T-shirt and pointed her towards a bathroom where she could change.

The documents add: ‘The plaintiff [Ms Mayorga] refused and stated she wanted to leave the hotel suite. Upon leaving the bathroom, Ronaldo pulled the plaintiff into a bedroom and on to a bed and attempted to engage in sexual intercourse. Plaintiff refused… and covered herself in an attempt to prevent sexual penetration.’

According to the papers, the striker then turned Ms Mayorga on to her side, and that even though she was screaming ‘no, no, no!’, she was raped by the star.

The documents claim the footballer confirmed the pair had sex but said it was consensual.

Ms Mayorga alleges she reported the incident to Las Vegas police later that day and went to hospital where evidence of the alleged rape was documented and photographed.

The court documents state that as she was changing, Ronaldo entered the bathroom, exposed himself and asked her to perform a sex act.

He later hired a lawyer, and in 2010 negotiated a £287,000 out-of-court settlement. As part of that deal, she agreed never to go public with her allegations.

But the new claim seeks to overturn that settlement, which she says she only signed because she was ‘terrified of retaliation’ from Ronaldo and of ‘being publicly humiliated by being identified as a victim of sexual assault’.

She says she has been left traumatized by the incident and has now gone public, in part because of the #MeToo movement in which women have shared their tales of abuse.

Ronaldo claimed Ms Mayorga’s injuries were caused by another person.

It was later said that Ronaldo allegedly paid her £287,000 as an out-of-court settlement which contracted her to never speak about her claims.

According to court documents Germany’s Der Spiegel claims to have seen, Ronaldo insists the sex was consensual. His lawyers, Schertz Bergmann Rechtsanwälte, issued a statement denying Mayorga’s rape claim saying they would sue for “compensation for moral damages”.

Watch his reaction below:

SEE MORE: Video: I can’t wait to feature Cristiano Ronaldo – Davido brags about his relationship with the Superstar

Argentine and Juventus forward Paulo Dybala have tested positive for the coronavirus for the fourth time in six weeks of being in quarantine, according...
Read more
International Sports

Argentine and Juventus forward Paulo Dybala has revealed he has tested positive to the now global pandemic the Coronavirus.
Read more
International Sports

Cristiano Ronaldo and Daniele Rugani were in the same dressing room for Juventus' victory over Inter Milan on Sunday, days before the...
Read more
International Sports

Kobe Bryant, the NBA superstar has been confirmed dead. He died in a plane crash in Calabasas this Sunday morning. According to reports, Kobe Bryant...
Read more