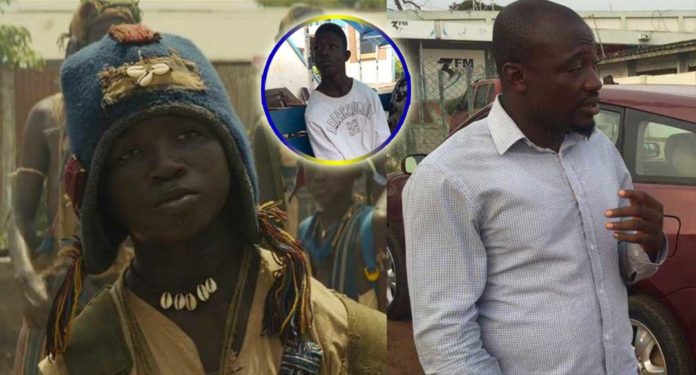 The manager of Striker, Mawuko Kuadzi whom Striker accused of using his GH¢10,000 to buy suit and shoes for him has denied the accusations. According to Mawuko, the money he used to buy the suit was GH¢1000 and not GH¢10,000.

According to Mawuko, Striker was paid GH¢1000 for starring in Jungle Justice which was produced by Regina Van Helvert of GHONE TV.

SEE ALSO: Mawuko Kuadzi, Striker and Abraham Atta’s manager finally explains how Striker ended up on the street and who took his $30K payment [Video+Photos]

The movie had stars such as John Dumelo and Yvonne Nelson in it so he encouraged his actor to take up the role despite it being a low budget movie.

“We had an event to attend after the movie at National Theater so I used the GH¢1000 to buy him befitting suit and other clothes”, Mawuko saiD

SEE ALSO: ABRAHAM ATTA HAS CHANGED TOWARDS ME: HE IS RUDE AND TREATS ME LIKE HE IS BETTER THAN ME – STRIKER [VIDEO+PHOTOS]

News broke yesterday that Emmanuel Nii Adom Quaye who played the role of Striker in the Hollywood movie, “Beast of No Nation” has been spotted begging for money on the streets of Accra to buy food.

Upon interrogation, he revealed he works with a man who sells yam at Agbogbloshie and stays with his grandmother at North Kaneshie.

He revealed he has not set his eyes on the money he earned from acting in Beast of No nations because one Kofi Rabbit is refusing to let him have it.

SEE ALSO: “I WAS PAID $30K AS MY SHARE OF ‘BEAST OF NO NATIONS’ BUT AM YET TO SEE THE MONEY” – HOLLYWOOD ACTOR, STRIKER WHO NOW BEGS ON THE STREETS FOR A LIVING

He also shockingly revealed the money he earned from acting “Jungle Justice”, another movie was used to buy a suit for him. An amount of GH¢10,000.

WATCH AND LISTEN TO STRIKER BELOW

SEE ALSO: Mawuko Kuadzi, Striker and Abraham Atta’s manager finally explains how Striker ended up on the street and who took his $30K payment [Video+Photos]