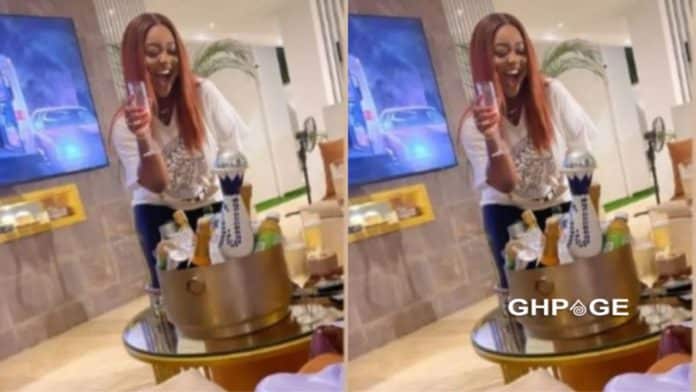 Jackie Appiah has once again given her enemies and attackers something to talk about for the umpteenth time after sharing new pictures of her expensive living room.

Apparently, the star actress cares less about all the negative kinds of stuff her haters on the internet have to say concerning the source of her wealth.

In this new fast trending photo, Jackie Appiah had a glass of wine in her hand and was laughing with glee.

One can also see her large screen tv, a customised cushion, and an ice bucket with numerous drinks inside placed on her centre table.

Check out the photo below to know more…

Popular artiste manager and entertainment show pundit, Bulldog – Has argued that it was unwise for Jackie Appiah to show off her over a million-dollar Trassaco mansion.

Speaking on UTV’s late-night entertainment show dubbed United Showbiz, Bulldog admitted that Jackie Appiah’s mansion is very sleek but he got very disappointed in her after she dropped an official coverage of the whole house.

READ ALSO: Jackie Appiah subtly responds to critics on her case to disclose her source of wealth

According to Bulldog, after the Nigerian actress, Luchy Donalds, shared a video of the mighty mansion on the internet that sparked a hot debate on the local digital space, there was no need for Jackie to share another video.

Bulldog went on to explain that, Jackie will now attract enemies for herself including GRA, and she would now be forced to pay property tax that couldn’t have been avoided if she didn’t show off her house.

READ ALSO: It took Jackie Appiah a decade to put up her mansion – Randy Abbey

The controversial entertainment analyst advised Jackie Appiah to lie to GRA that the house is not for her when she’s being summoned to pay property tax.

However, a lot of Jackie’s fans have blasted Bulldog and suggested that he isn’t in a right place to talk about Jackie.

Because Jackie has worked for big companies as BRAND AMBASSADORS so Bulldog should know better.