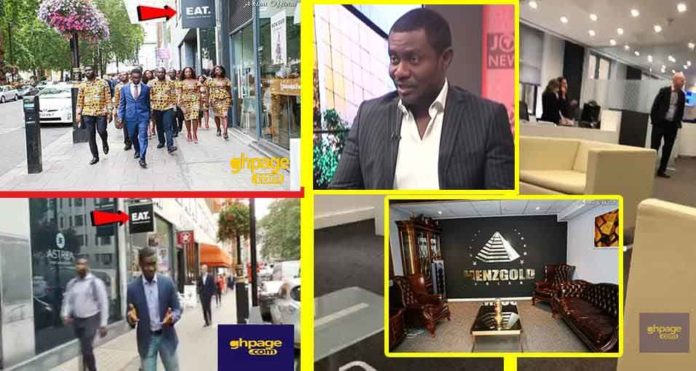 Joy news editor Israel Laryea has further explained what led to his visit to the Menzgold office in the UK and what really transpired apart from what we have seen in his earlier reportage.

Israel speaking on the pulse on Joy, first of, revealed his mission in London was that he was at the Oxford University, at their school of governance after being selected to join some participant on an executive course on Oil, gas and mining governance — how to make optimum use of the revenue that comes out from those precious natural resources.

He continued that, he finished the course and was due to return to Ghana on Wednesday. But finishing the course over the weekend, he thought he had some time to do some two ‘important’ stories of public interest.

That is Kweku Adoboli’s, the former UBS banker who served jail time for losing 2.3 billion dollars of his company’s funds in “unauthorized trades” in 2011 and that of the Menzgold issues.

Before going to the Menzgold, Israel Laryea said he went to see Adoboli which he described seeing Kweku, crestfallen and dejected as he was allowed into the visitor area at the detention centre – more like a prison – nothing like the high-achiever who used to rake in billions of pounds sterling for his former employer, UBS.

And on Wednesday morning, he went to the Menzgold office. Quickly, he went to the lobby to check if he could walk in with his cameras but from the looks, it was obviously not possible.

So at the point, he said what he was interested in getting to know if they truly have an office in Berkeley, May-fair,London.

He then got in touch with someone who was there at the time Menzgold were doing the commissioning. And as we saw in his earlier reportage, he posed as a businessman who is there to hire an office which he was taken round.

He got to the first floor where Menzgold is and he saw nameplates of companies on the floor listed but couldn’t find Menzgold.

It was at that point he saw the two ladies —who looked Ghanaian— coming out from the Menzgold office.

He wanted to talk to them but that would have given him away as he had initially posed as a businessman looking for an office—and thus might lead to why all these questions.

He said, when he got down, he called Menzgold’s PRO, George Quaye to find out if he could hook him up to speak with anyone at the Menzgold office in the UK, but George stated that he had just assumed office so haven’t familiarized with the people there.

So it was at that point he had to use what he has gathered from his visit.

He reiterated that Menzgold’s mode of operation in the UK is different from how they operate in Ghana.

Social media is presently flooded with a lot of tributes and farewell messages from Global Superstars to the late Kobe Bryant following...
Read more